Last month, the Arquillian developers got together at Red Hat Summit / JBossWorld 2010, hosted at the Seaport World Trade Center in Boston, to Experience Open Source with our community. 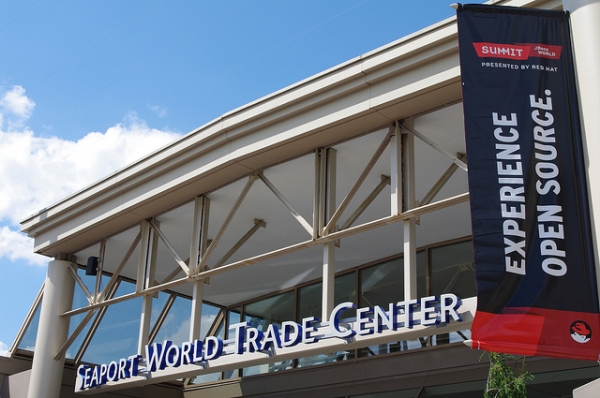 We asked the community what they wanted to hear about at JUDCon. Survey said…“Arquillian.” So we unleashed Ike and his fleet of testable containers onto JUDCon and JBoss World.

While Arquillian only appeared twice on the official schedule—once at JUDCon, presented by Aslak and myself, and once at JBoss World, presented by ALR—it managed to make an appearance every hour, in one form or another (including bar discussions). Thanks for encouraging him with all the votes!

On the eve of JUDCon, three of the Arquillian ringleaders (Aslak, ALR and Dan) met up at Harvard Square bar for the Boston JBUG to devise a plan to make testing a main focal point of the weeklong conference event: 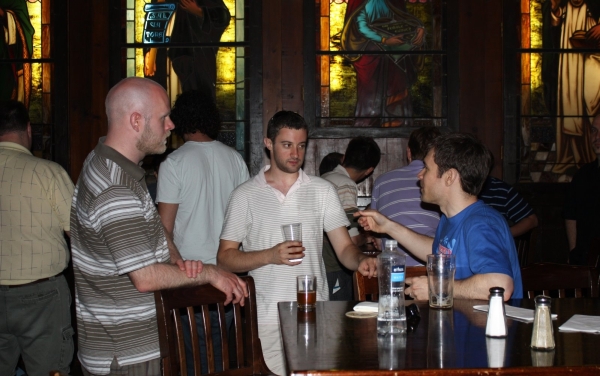 Not letting a moment slip by, Arquillian led off the community track at JUDCon early the next morning. 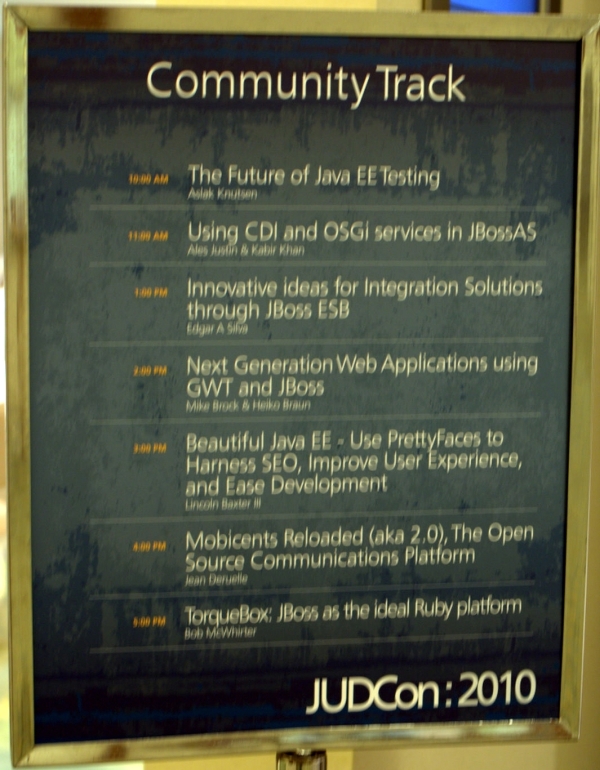 Aslak and I wanted to leave a strong impression on the audience. So instead of going on about theory, we prepared a talk on the future of Java EE testing that can be summed up as: demo, demo, demo, demo. With me driving the commands (doing my best to type on a Norwegian keyboard layout), Aslak pointed at the screen and, in a flash, showed how Arquillian can make child’s play out of testing EJBs, JMS, JAX-RS, JPA and even JSF. 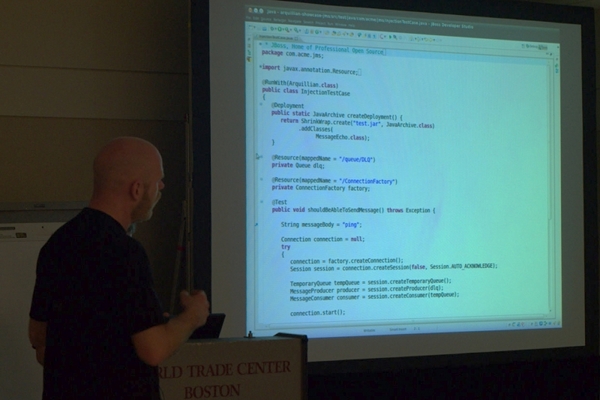 While we’ve come a long way with Arquillian, presenting always gets us thinking of other things we can do with it. (Notice Aslak sporting the black Arquillian shirt). 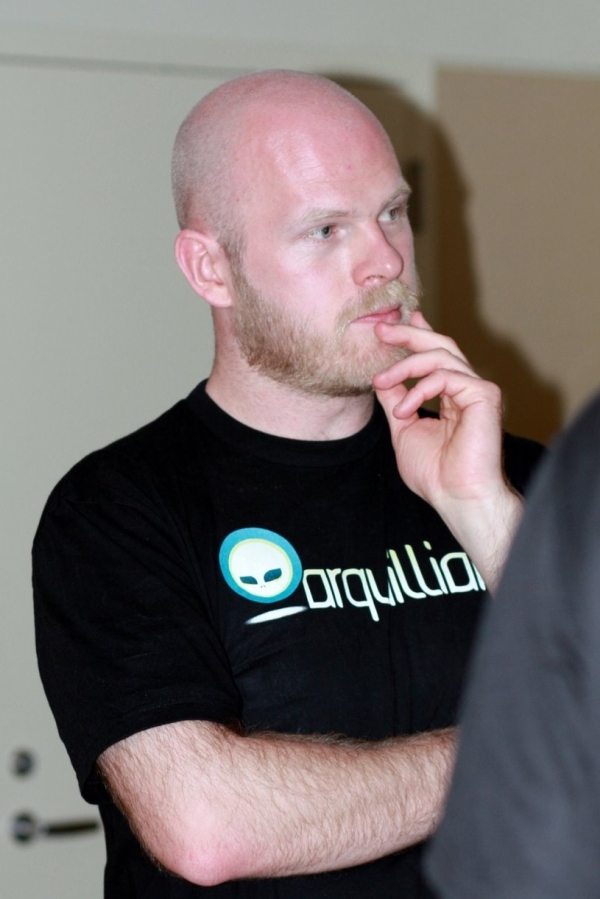 Ike didn’t want to get stuck inside the computer the whole conference, so we printed him on a bunch of shirts and buttons to give away. Our plan was almost foiled because of my absentmindedness, but it was saved when my wife delivered the “bag of goodies” just as the talk was ending. We spread the Arquillian swag around and it scattered off to invade other talks and strike up conversations. 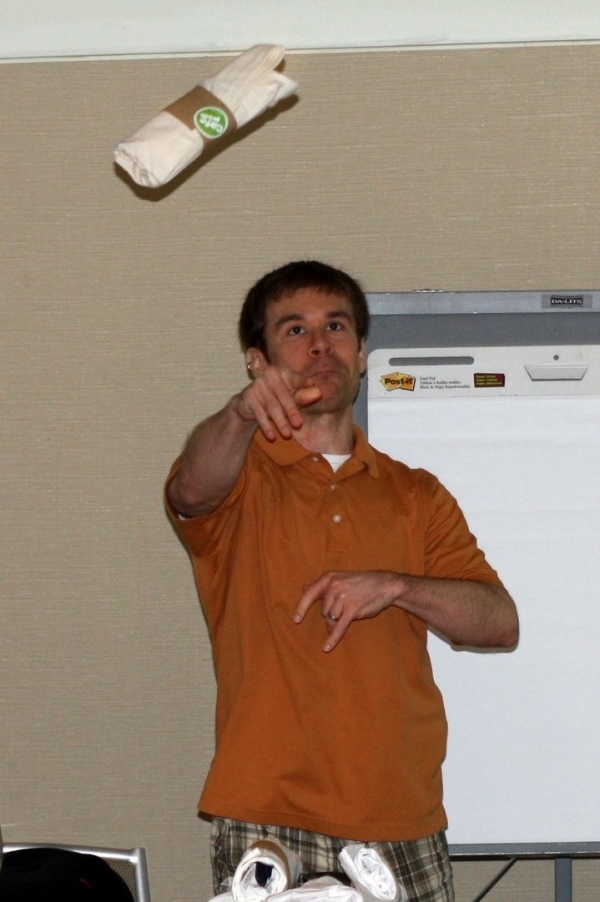 Everytime you turned around, Ike was hitching a ride on someone’s backpack. 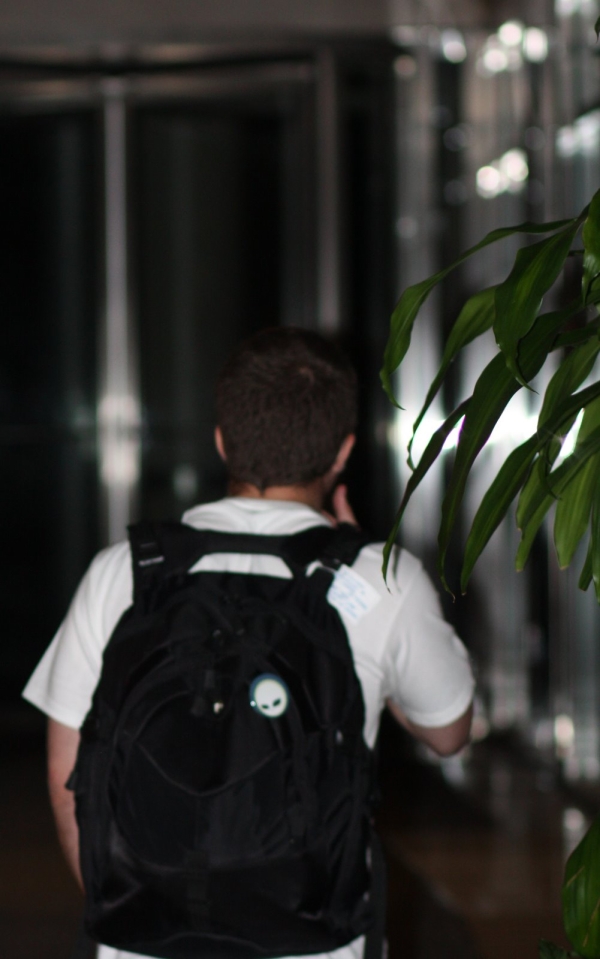 Making his second apparence on the JBoss Community Asylum, this time under the JBoss moniker, Aslak explained how Arquillian makes the task of testing Java EE applications simple and possible. This would be one of many trips to the microphone throughout the week. But this time, he caught some grief from the jokester hosts poking fun at the project name:

Who is Hark William? Is he a country singer or some sort of character from Star Wars?

His name is Ike. And he’s from Hollywood. He’s an alien that controls everything inside his little world.

If Ike could speak, he would have simply issued the warning:

He must have left quite an impression, because the host immediately credited Arquillian as having “a couple of talks today.” Sure, that’s how we remember it too

Even though the Arquillian team only had one talk at JUDCon, we did have a front row seat in the Code generation world premiere presented by Jesper Pedersen from the IronJacamar Team, showing of their shiny new tool for JCA adaptor source code generation with full Arquillian test support.

So what’s the Arquillian project status? “Alpha3 is coming soon. And more containers.” (Little did they know, three containers would be added later that night).

The podcast had interrupted the JUDCon hackfest. It then proceeded to ultimately disrupt the hackfest when Emmanuel announced at the top of the hour,

Let’s go get some beers.

So all the talk of a hackfest ended up being just that, talk. But wait, not those hard-core Arquillian developers. They’re the only ones that stuck around, pressing on even in the absense of beer. 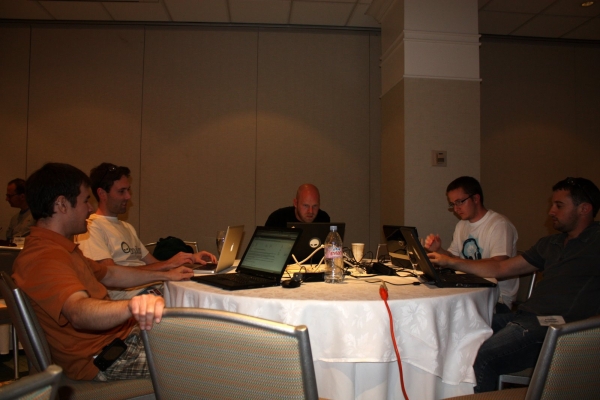 “Why?” you ask. Because we were hell-bent on getting the Tomcat and Jetty container integrations working. I did the Jetty integration while Jean Deruelle worked on the one for Tomcat. Lincoln Baxter III looked up from his work laying down the foundation for JBoss Forge. 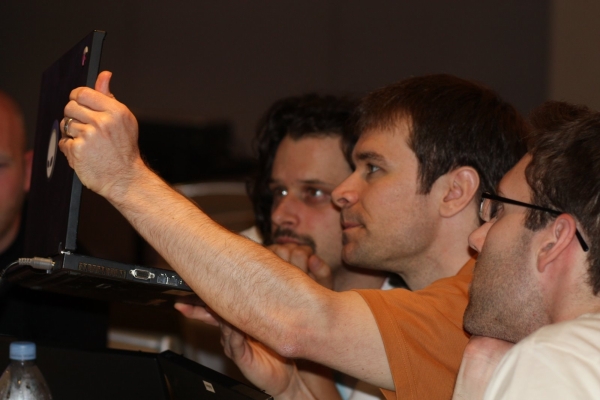 Once we both got green bars, we finally called it a night and headed out for a round of drinks to celebrate. 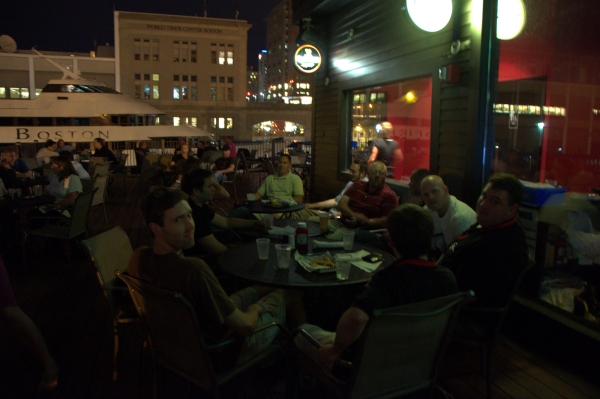 We took a break the next afternoon to check out the sights and sounds of downtown Boston, which could be seen off in the distance from the conference center. 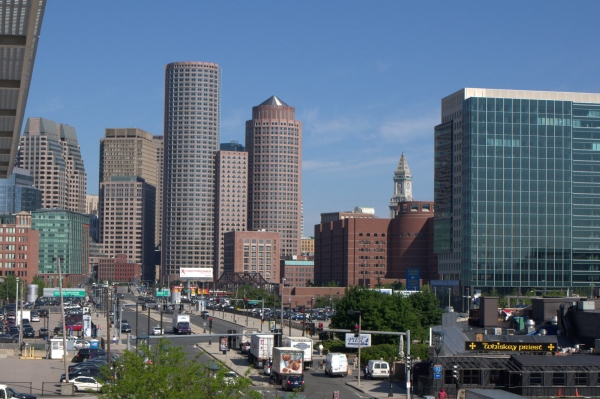 That evening I headed over to the Red Hat Summit kickoff at the pavilion for my booth duty. Ken Gullaksen, one of our top community members, snapped a shot of me sporting our cool Arquillian desktop wallpaper on my Android phone.

Fashioning the Arquillian button, I was soon approached by an attendee who asked me if I had any extra. I asked him if he knew what they were for. He replied,

No. But it looks really cool.

Ike, such a developer magnet ~;)

At some point we made our way from the conference center to a bar downtown. Like always, I’m in the bar ranting on about some technology, probably Maven: 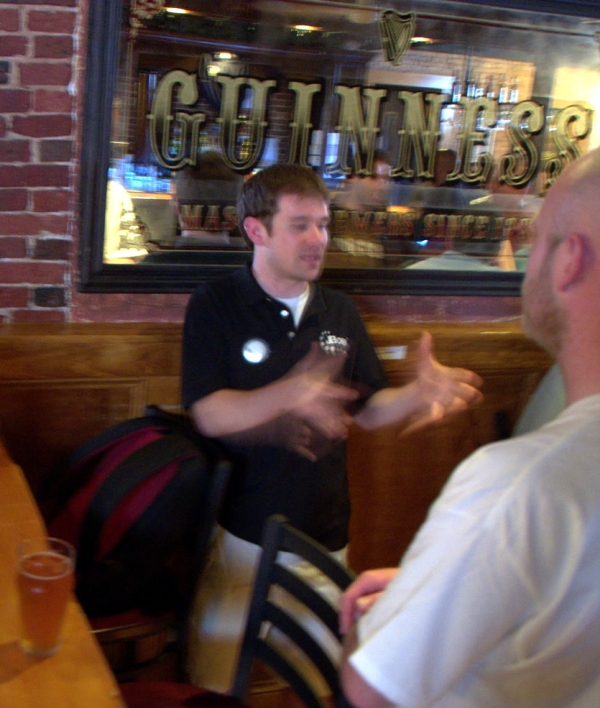 We were up early the next morning for the second Arquillian charge. ALR kicked off the conference by showing how developers can achieve rapid development with Enterprise Java by throwing complexity over the wall and using ShrinkWrap and Arquillian, while at the same time Mark Little, our director, was in the other room explaining how Arquillian fits into our strategy in his JBoss State of the Union address.

Arquillian is central to the evolution of platfoms & relevant for development.

To put it more bluntly, he slipped out,

You need to test the hell out of things.

Handling all that complexity for the developer is hard work, though. It really took it’s toll on ALR, 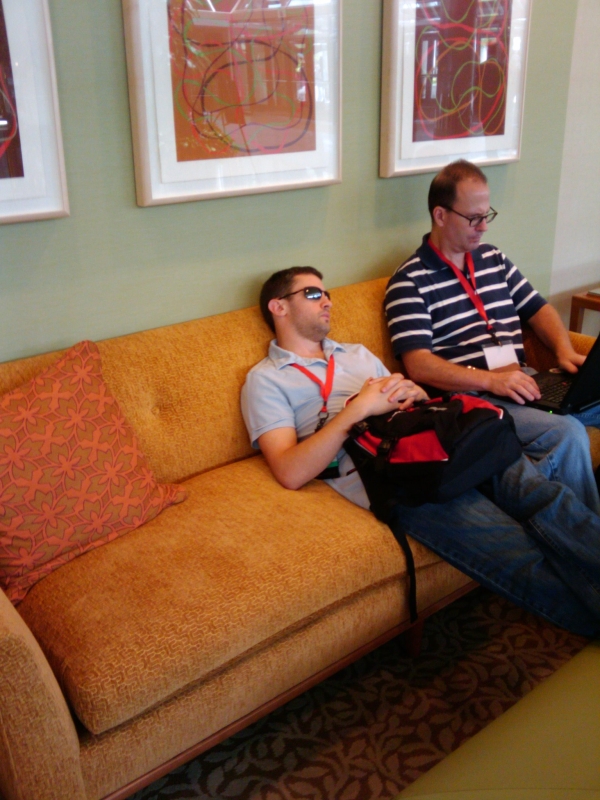 Arquillian got a mention in the joint RichFaces 4 / Seam Faces talk and the Seam 3: State of Union talk. All the activity had the developers’ interest piqued. When Pete Muir asked during the the JBoss Developer Story BOF what people wanted to hear more about, someone called out,

I want to hear more about the testing tool.

Once again, Aslak was called to the mic to showcase Arquillian. The timing was excellent because Burr Sutter, who is currently focused on improving the developer experience, witnessed first-hand how desperately this tool is needed. Afterwards, I said to him,

It’s like we just showed up with food to a starving country.

And what are they asking for? More.

Until we meet up again, we’ll be hard at work making testing as easy and powerful as possible. That means working closely with our tools guy, Max Andersen (left). 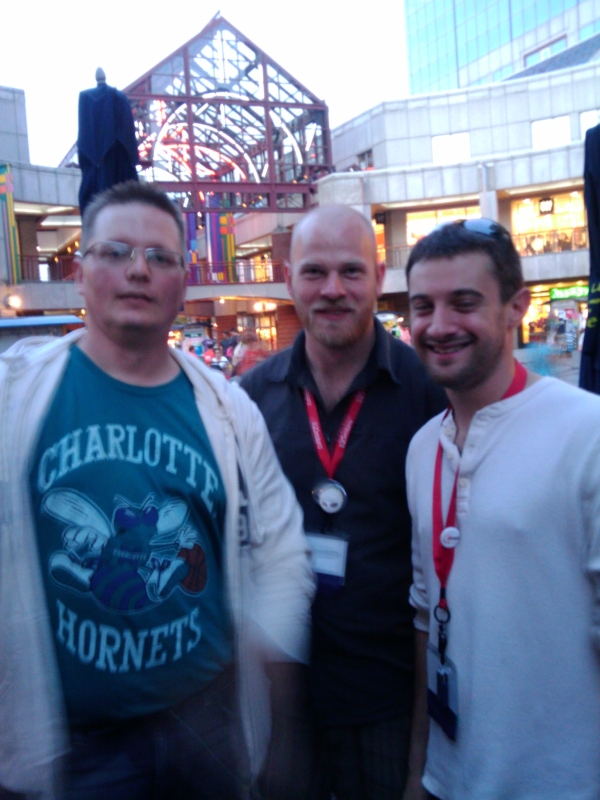 Ike sure had a big week. So at the end of it all, we bought him a drink (at Drink). 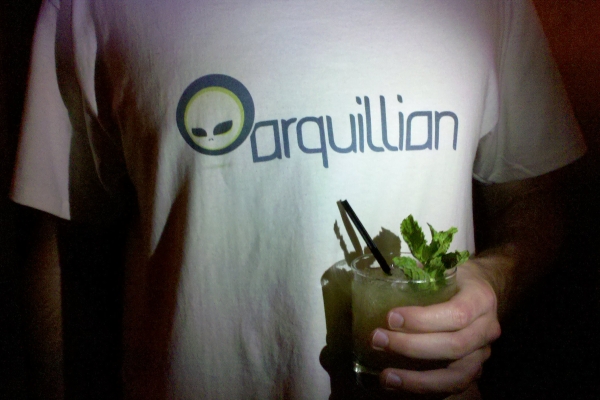 The Arquillian forums are really heating up! Community participation is what makes the success of Arquillian possible. Keep it up folks!